Set To Join Hunter Hayes’ CLOSER TO YOU TOUR In April

Co-written by Tegan Marie alongside Stephanie Chapman, Nelly Joy, and Jason Reeves, “Horses” layers her unique Country sound with a lush production. Inspired by Tegan’s own life-long love of horses, the track is about realizing how we are all deeply connected at our core. With soaring chorus harmonies and thought-provoking lyrics, “Horses” showcases a natural evolution in the rising star’s music.

DREAMWORKS SPIRIT RIDING FREE is a Netflix original series that centers on a group of three friends, who together experience coming of age and the power of friendship. Lucky, a gutsy 12-year-old girl, befriends a wild mustang she names Spirit. With her two best friends – Abigail and Pru – and their horses by her side, they explore a world filled with endless rides and never-ending fun. Together, they’ll push their own limits and discover what it truly means to be free, with all new episodes debuting on Netflix April 5.

Meanwhile, Tegan is hitting the road this spring. The powerhouse entertainer – who’s still only 15 years old – will begin by opening a series of three shows for Hunter Hayes on his CLOSER TO YOU TOUR next month.

Following the success of 2018’s “Keep It Lit” and “I Know How To Make a Boy Cry,” Tegan was named as one of four artists selected to be part of the Grand Ole Opry’s Opry NextStage program, which showcases artists making incredible music at the forefront of their careers. She is currently featured in OPRY NEXTSTAGE PRESENTS TEGAN MARIE: IN THE MAKING, a four-part docu-series created by the Grand Ole Opry to trace the path of her launch to stardom. After making her Opry debut last year, she is currently working on new music with hit-making producers Scott Hendricks and Nathan Chapman.

With a larger-than-life voice, Tegan Marie, 15, was discovered by girls’ media platform Sweety High and went on to become the youngest female to sign to a major Country label (Warner Music Nashville) in 45 years. Since first breaking out onto the scene, she’s catapulted into the national spotlight with performances on ABC’s Good Morning America, NBC’s TODAY and PBS’ Smokey Robinson: The Gershwin Prize, in addition to appearances on the Radio Disney Music Awards (2017-18). As her videos continue to gain a wide audience (over 200 MILLION views), Tegan Marie has performed at the Grand Ole Opry, Ryman Auditorium, Stagecoach, CMA Music Fest, and shared the stage with artists such as Cam, Hunter Hayes and Kelsea Ballerini while partnering with Pepsi MidAmerica for a tour across the Midwest. Critics took notice of the young star’s talent with Billboard, HuffPost and Rolling Stone naming her in their 2018 watch lists and with USA Today hailing, “[Tegan] Marie has the personality and the voice of a future star, and she definitely has the always hard-to-define ‘It’.” 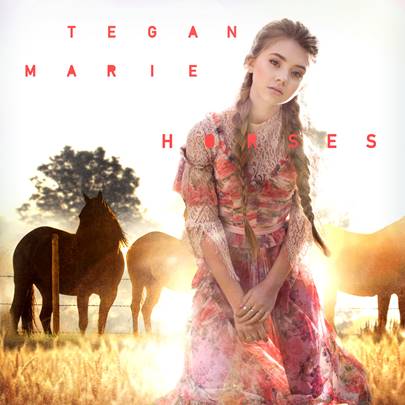